Because if you look at the 13 period BB, the hits at the midddle or outer bands are EXACT touches while it is not so in the other periods. The last swing low of 5170 did not touch the lower BB level in 34 period while the swing top of 5400 did not touch the upper level bands in both 34 and 20 periods .  Not so in case of 13 period. So here we are . 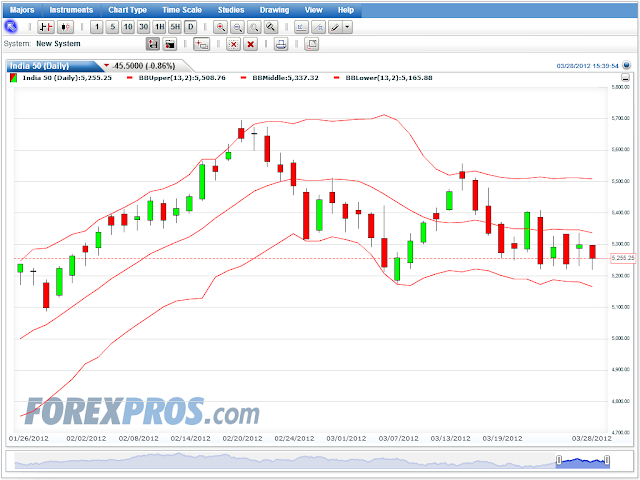 The lower level is at 5165 and it may move a little lower while we come down .   This chart is for April futures contract . Currently theres a difference of around 50 points with NS. HOLD on to your shorts . No doubts now right .
Posted by jonak at 6:06 AM 2 comments:

This may be fun but this should  also be taken seriously . Both were Central bank pumped liquidity BULLand the pattern looks amazingly similar. This is the DEFTY chart and the 161.8% extension and wolfe wave targets in NIFTY translates to 6096. 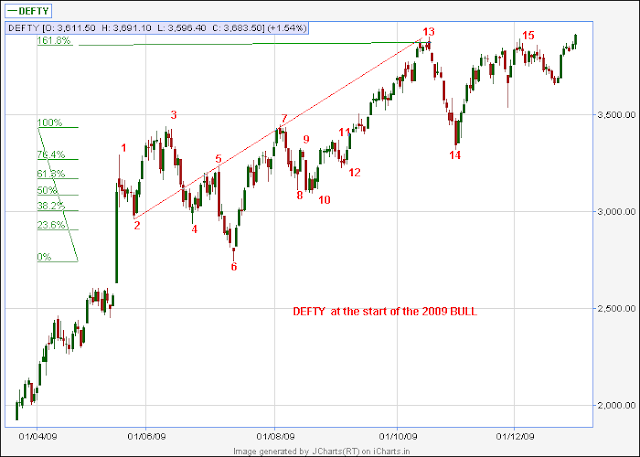 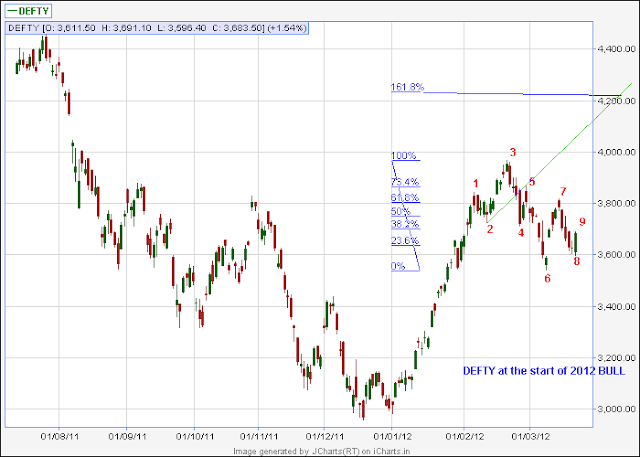 The best technicals that are working are the 13 period bollinger bands in this daily chart . So i expect NF will hit the lower level which is around 5208 now .And it may go a little lower as we head down. 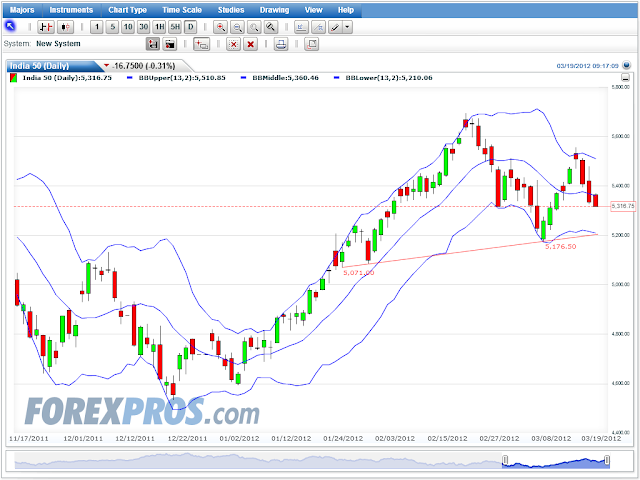 The correction looks over. Major support at the blue pitchfork line. If that breaks new lows will be seen.
The green line joins resistance at a and support at b . 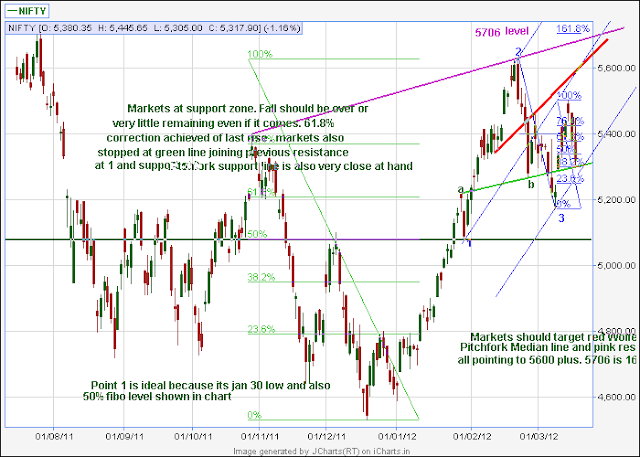 I was looking all over the 1998, 2000, 2004 charts to find out similar patterns , upmoves , corrections which we are undergoing now. But surprise surprise, i found what I was looking for in a time frame much nearer ,2009.!!!

The situation was similar . After a significant correction, central banks pumped in liquidity and markets started to rise. After a long rise , the below scenario took place. Click on charts. 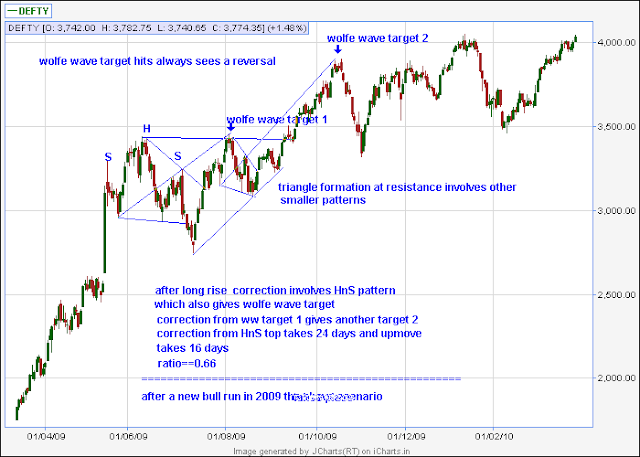 now see the current Nifty path. We should go up till 21st march . Then using the same ratio 0.666 we find correction will occur till 29th march . Then April-May should see another BULLrun like Jan-Feb. 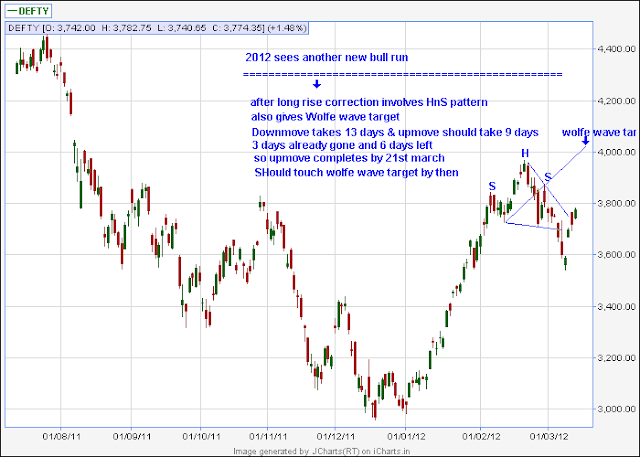 I always had in mind that this was what was going to be formed  And today i see with my own eyes. Inverse Head and shoulders in Nifty .
Good 200+ points in this one . 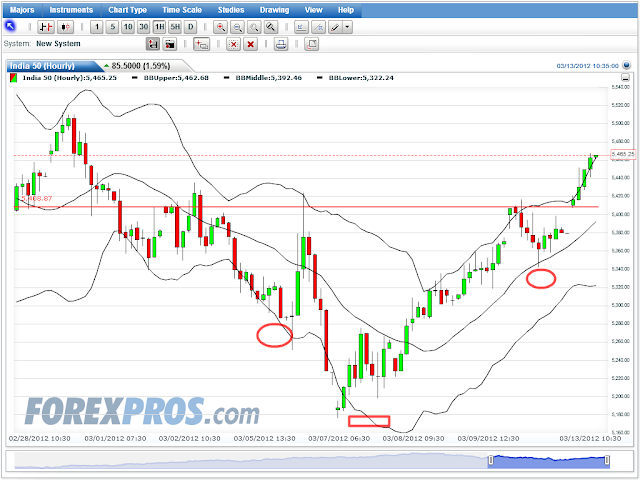 Nifty :Chances of a new high.

Now the down move touch of 5238 as expected in the below post is done. So I think next will be a very fast UP MOVE. If you see the chart below we touched 38.2% retracement. We  also have a Wolfe wave RED line target there. 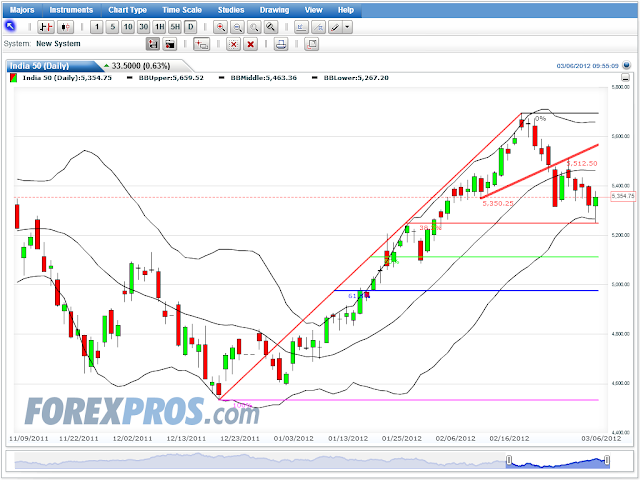 Now another reason i was confident of a touch of the lower bollinger band in the daily chart is another ANALOG I  found from 2010. And this is the reason I am confident that we go up very fast ; perhaps even make a new high.

After a good rise in September 2010, without even touching the mid bollinger band similar to what nifty did in January , Nifty did a complex correction to touch the lower bollinger band. After that , it just flew off to make a new high. 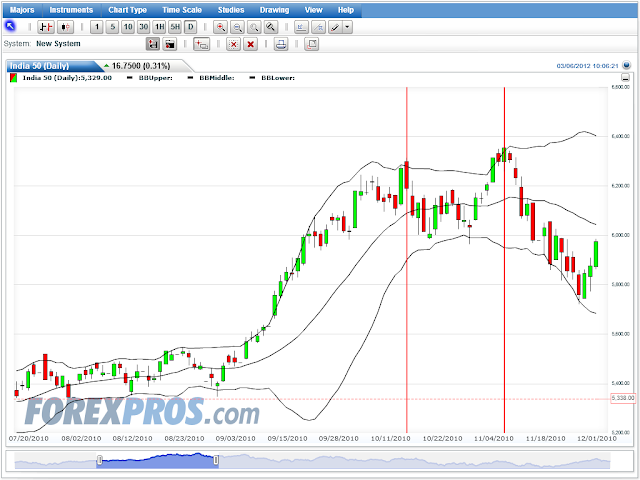 I think this time too the pattern will be replicated  , and Nifty should touch OLD highs atleast if not cross it.
Posted by jonak at 8:40 PM No comments: