First this chart in 10min TF. 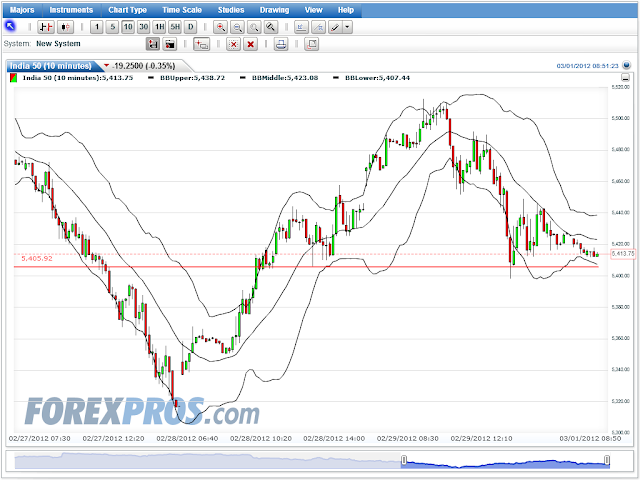 These FREAK trades occured 2 times last year . And both of times Nifty touched the figure. So expect 5263 in Nifty futures.
Gold and crude sold hard yesterday . Not good for other asset classes too.

Also high premium although it got decreased yesterday a bit. 5 hour charts are looking bearish . And looks like my analog will work and nifty Futures will hit the lower daily bolinger band.

So changing my views from yesterday. We will go long once nifty is 5240 area.

I thought that Nifty would atleast touch the Lower Bollinger band. But it did not. Though the Analog was as good as it gets . But that doesnt mean it did not work . Now we have to see whats ahead. First lets see where the market bounced  from .
Bounced just above the 233 DMA, touched the 34 SMA, and also 33% retracement. 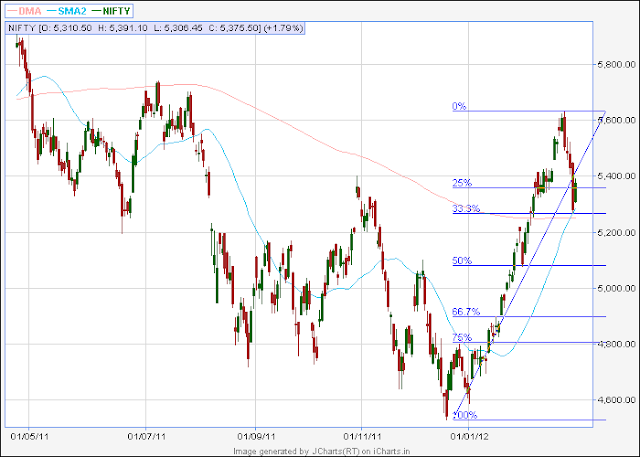 Now look at the following combination of HnS and Inverse HnS that we found when Nifty was climbing last January . 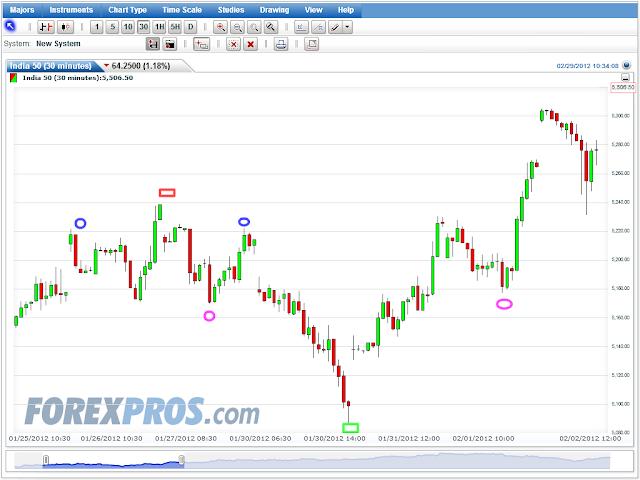 Now check this current Market doing a similar formation . I bet Nifty Futures will first target that Neckline at 5563. And then come back to complete the right shoulder . This is massively bullish if this analog works. 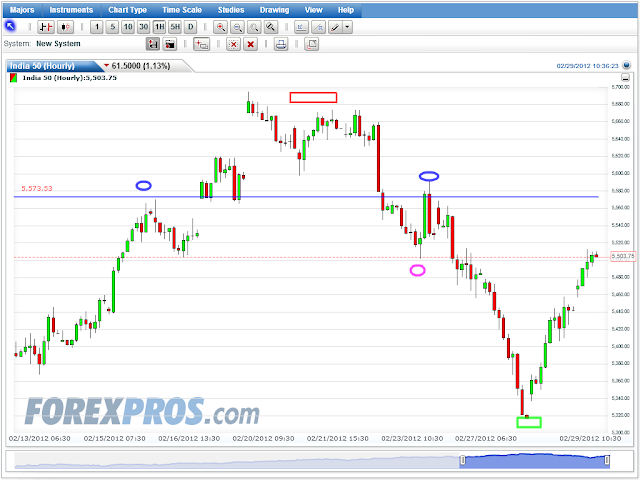 Also another reason to be bullish is the following chart of AUD/USD. I thought yesterday that we might come back to complete a 5 wave abcde bull flag. But the resistance line has been taken apart. 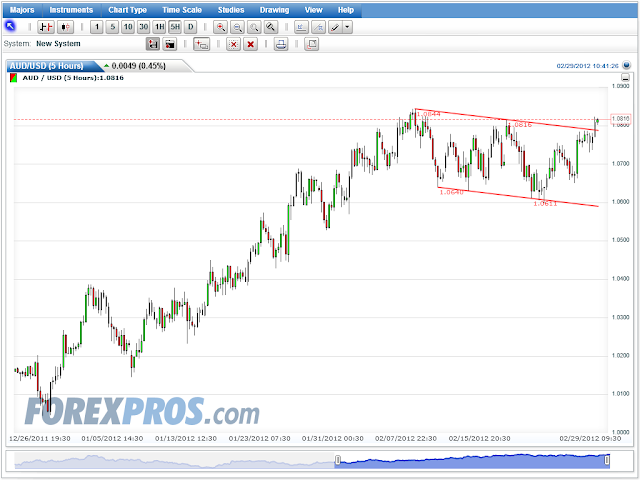 Doolar chart updated. The dollar analog correctly called the dollar movement .
http://markettechnicals-jonak.blogspot.com/2012/02/dollar-analog-suggests-much-lower.html
Many people were calling for higher dollar by looking at the higher lows of the dollar. Its been going low and now we can see a HnS confirmed in daily chart . Next support is at the pink line and 61.8% retracement at 77.58 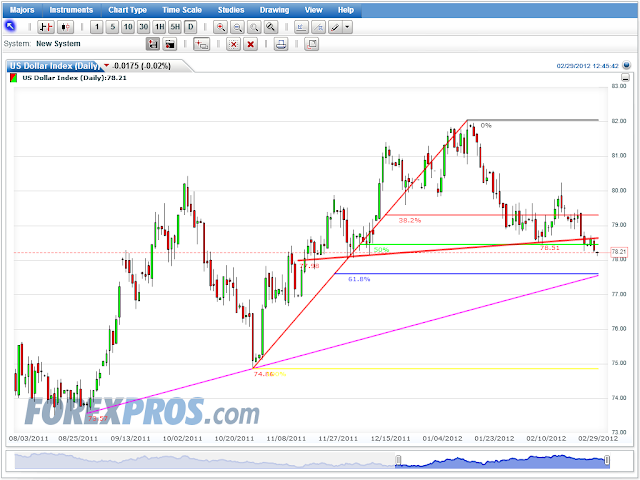 Bullish for NIFTY.
Posted by jonak at 9:16 PM 4 comments:

UPDATE 1 :---I am kicking myself in the back for not spotting this one before. Watch the 2 charts . One from 2010 . After a similar rise to the one we had right before the fall, Nifty had a steep fall and hit the bollinger band( 20 period) 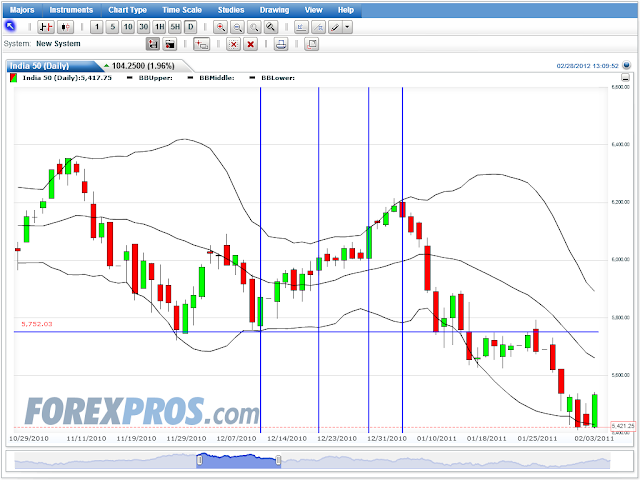 Now see this current path of Nifty . Now we are seeing a strong bounce right now. It doesnt mean analog behave exactly but the Pivot points should match . And that means todays bounce is just a 4th wave kind of a bounce and we are going down to touch the lower bollinger band in NIFTY FUTURES  over the next couple of sessions. 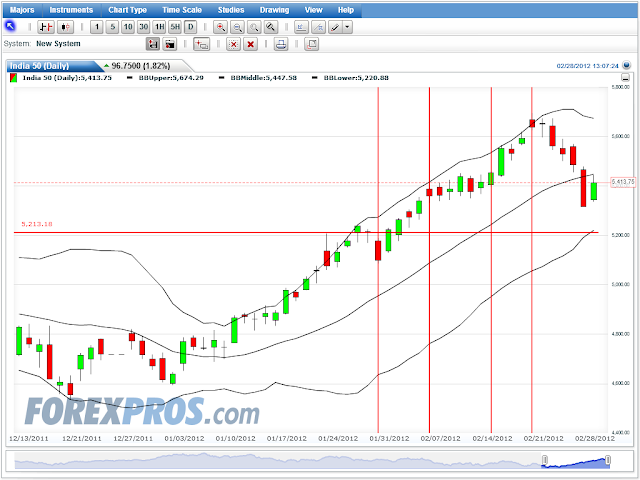 Now the correction has been a bit too fast . We might keep on placing those fibonacci retracement levels, but most likely Nifty will find support on that lower bolinger band . The below chart is of Nifty futures, the lower bollinger band level comes at  5193 right now . We should reach there most probably tomorrow. So I am expecting another steep fall tomorrow. 5193 in Nifty Futures translates to 5150 in Nifty .  Lets see what happens tomorrow. 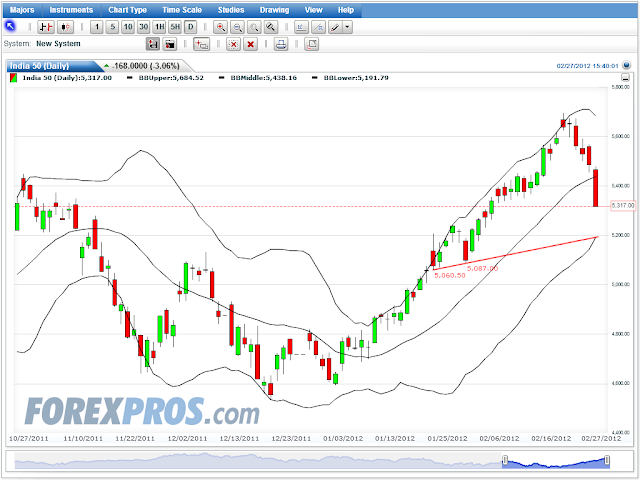 Dollar analog::--Suggests much lower targets for the dollar.

Just looked at the dollar chart and observed that it has got much similarity in this down move  with the down move last year. I have marked similar points with same colored figures.   RSI, MACD and even Bollinger band is behaving in same way . 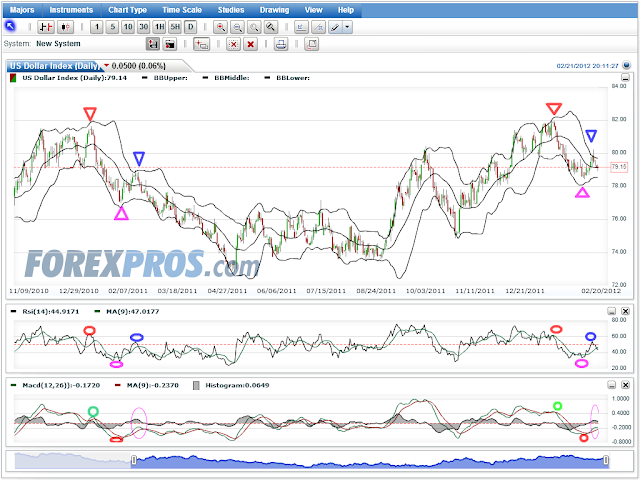 If that works out well, and dollar has much lower to go.  In that case NIFTY might fly to greater heights without a good correction .
We might see 6000 without a good pullback. 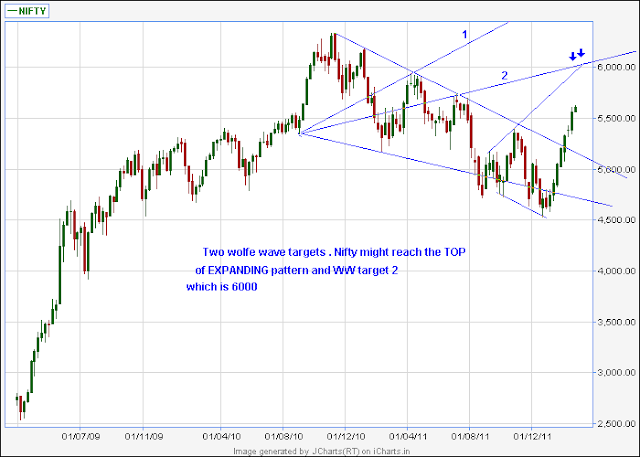 FIrst this AUD/USD chart. Its staying in a channel. Also above resistance today . This should go higher. 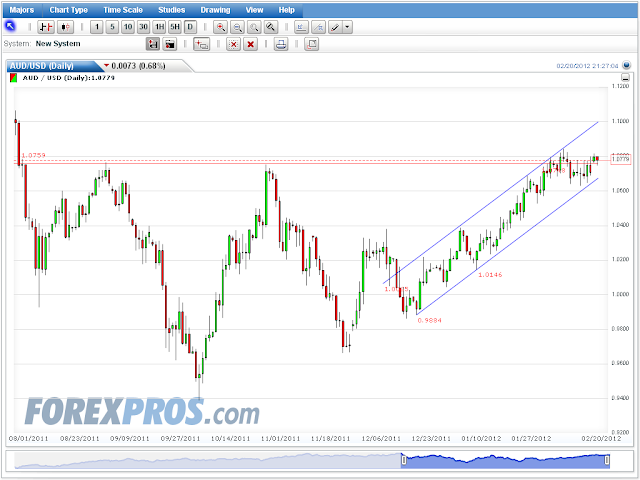 As we can see that its been  a series of higher lows. So bullish in this one. 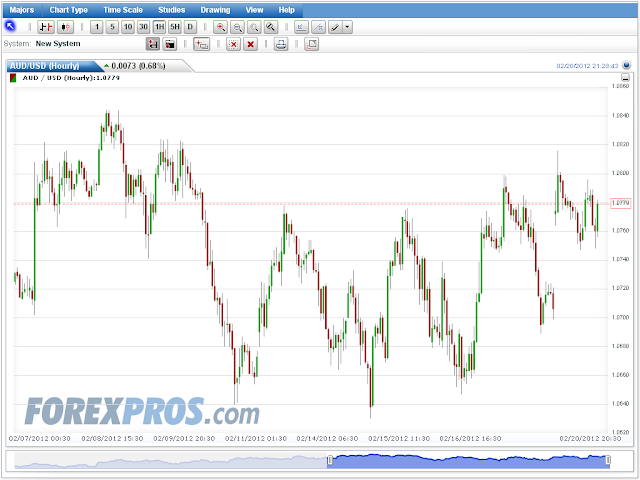 Megaphone top which was expected has been cleared in S&P futures. Now trading above resistance line. 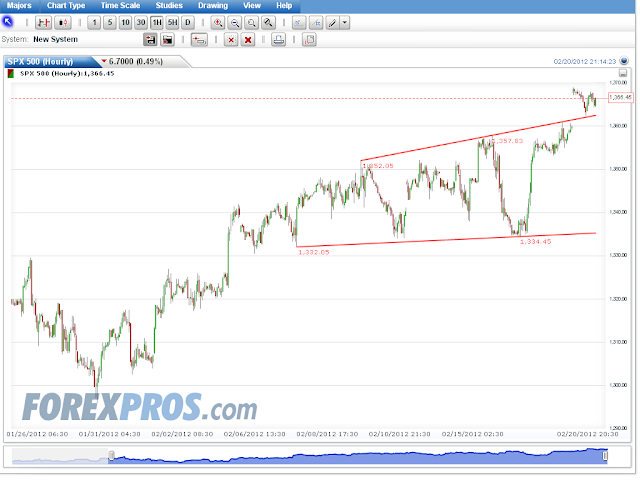 Today INDIAN futures also Gapped up  Thats a positive sign for bulls. If 5650 is cleared. 5900 should come easily. 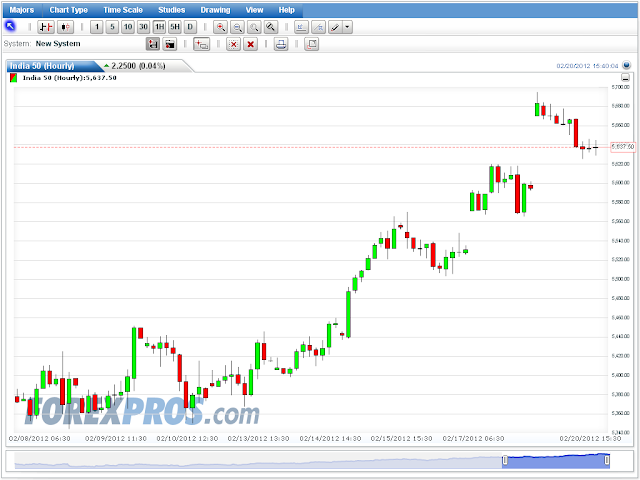 So Nifty has broken out as expected yesterday . But now how high we might go. We have to remember that a correction is almost due. So I thought i will try to forecast  a target with this nice method of mine .

No suppose we correct from whatever level we reach , most probably we are correcting upto the mathematical ratio of 33% . 233 SMA touch  is also a high probability . So I placed both 233 SMA and 33% retracement on the chart . Funny , both are at the exact same level. No if we look at the 0 level, that comes to 5599. So that should be our target 5599. By this week . 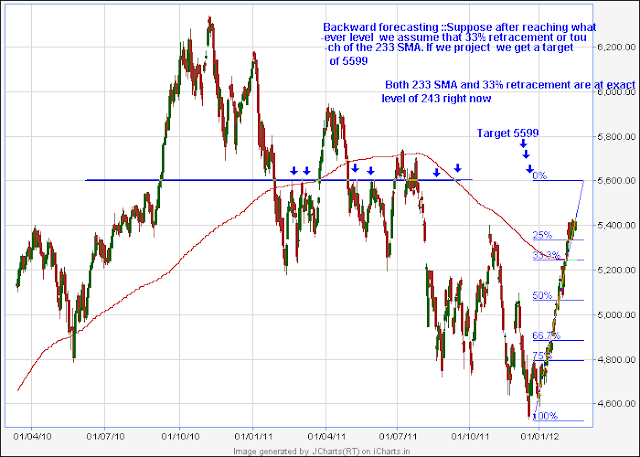 Though the post below shows that I was expecting correction , I am tempted to change my mind here. The resistance at 5434 is tough. But look at the HIHGER LOWs that nifty has been making during the consolidation . This almost looks like an ascending triangle pattern. Most probably we will breakout UPSIDE> 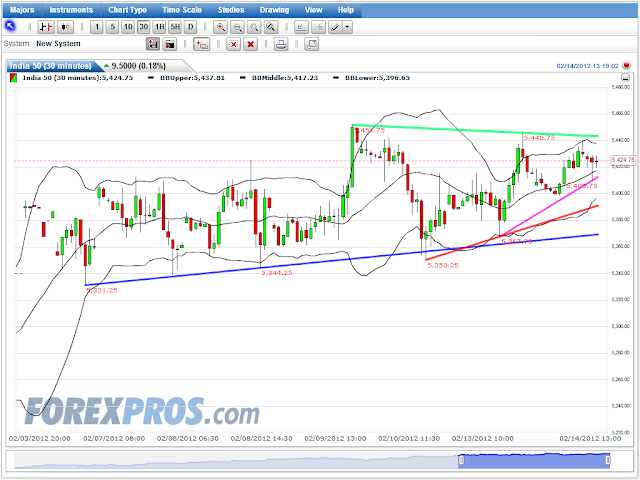 This is the futures chart . Stopped exactly at the 50% retracement level. 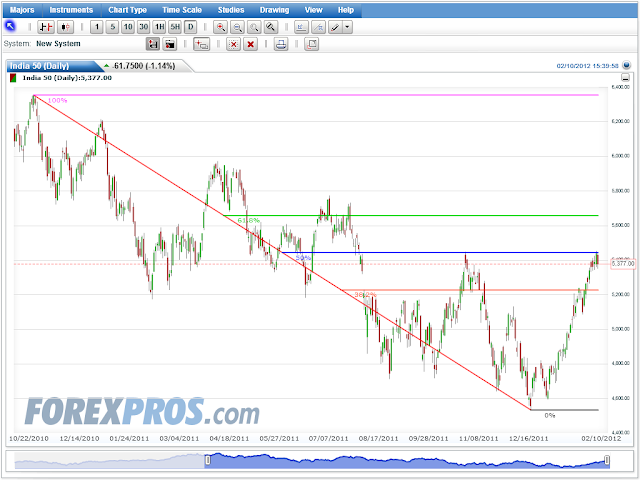 Dollar futures  is finding good support at 50% retracement at 78.43

The DEFTY chart below. It has actually been falling for the  past couple of days. Could be going down for a probable right shoulder. 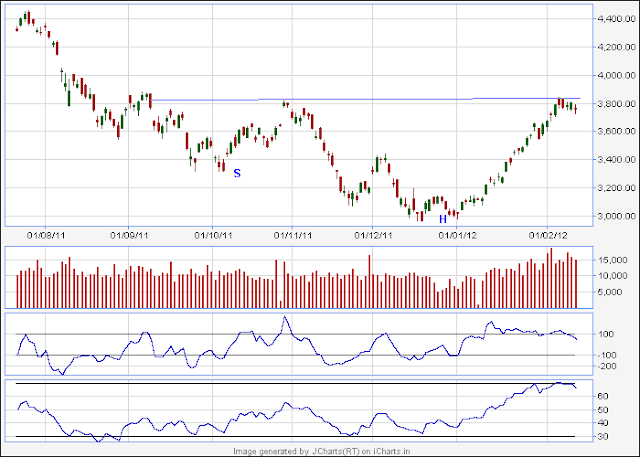 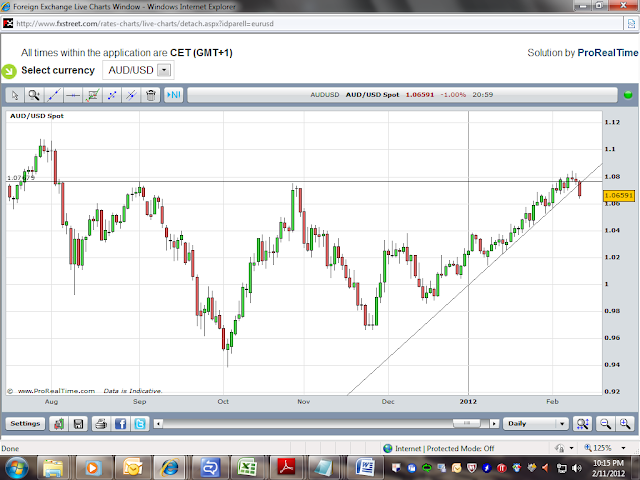 Nifty touching the lower support of channel that we broke last year.... 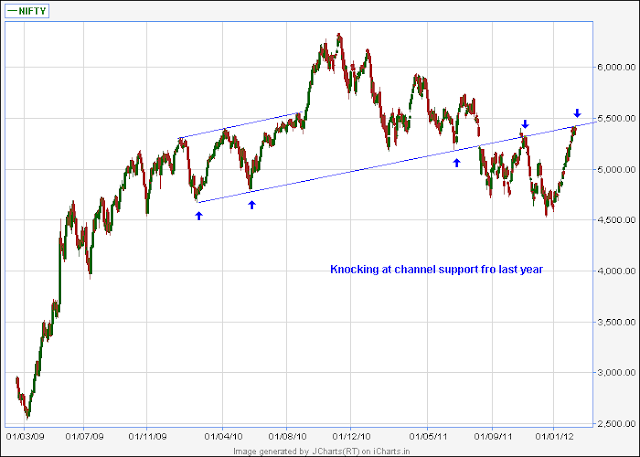 SEAT BELTS??????? If I were you , I would be reaching for the chair right about now..( the below is not my chart though) 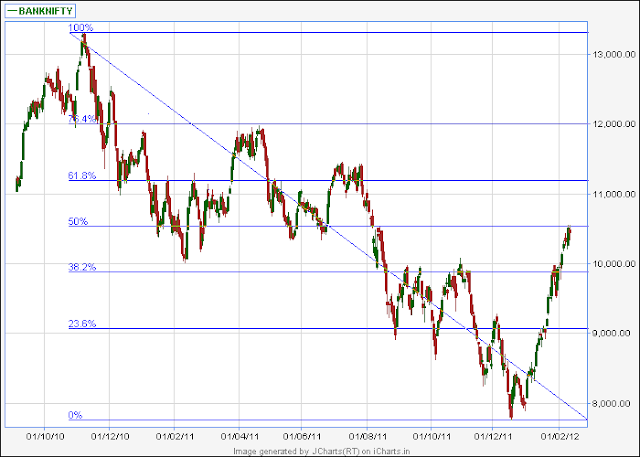 So when do we see a good reversal .Thats the question everone is asking . I thought I would better look at the dollar to give some clues. Though the dollar is at support levels ...and trying to bounce; we see that the lower bollinger level has moved down far below. I have seen that dollar whenever in a downtrend, like now, it never reverses without touching the lower level of the bollinger band. So we have atleast 100 pips to go and that means a little more upside left in the stocks. 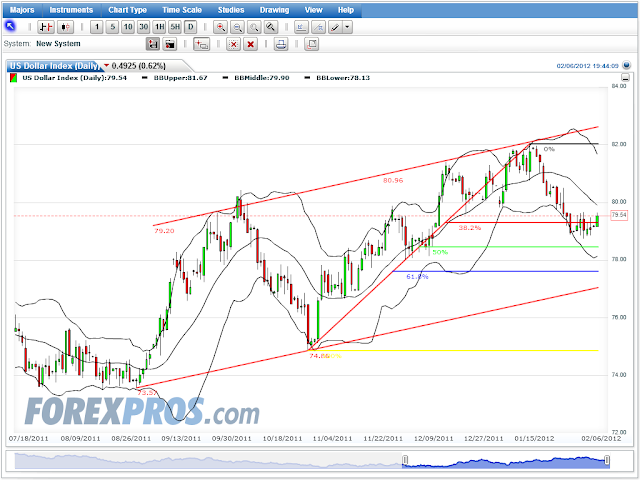 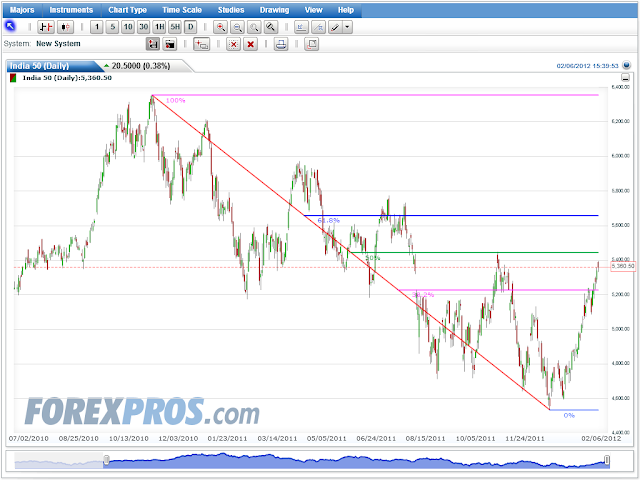 We also have to keep an eye on the WOLFE WAVE TARGET . Touching would require 5500. Definitely possible. 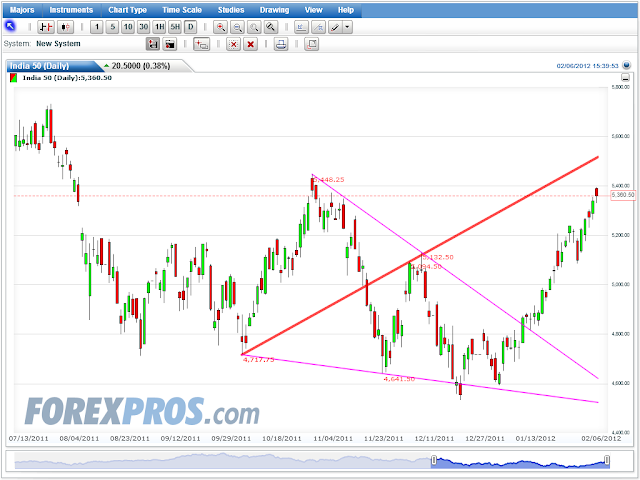