Did not expect this strong blast . Don't really know where its headed right now. Only thing I am hoping at this time is that October 1st week or may be 2nd we should get a good buy opportunity. But how is the market gonna behave till then . How high is it going from here. Difficult to say. If I say that October 1st week we should get a very good BUY opportunity , then we should see some correction . But when will the correction start and how high can this market go? 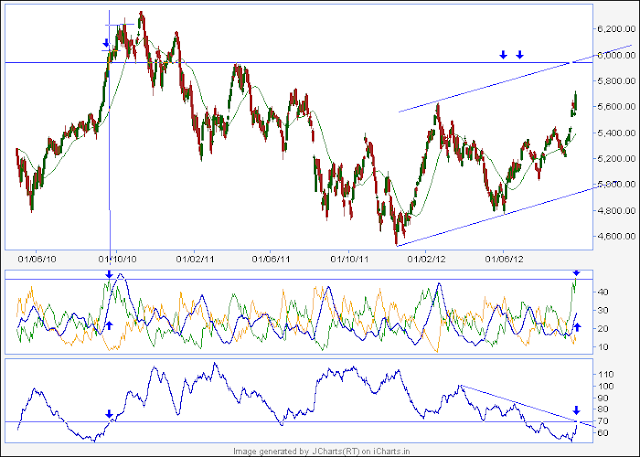 We see from the above chart DMI( Directional movement index ) and the ATR behaving very similar to 2010 September period. The green graph in the first indicator(DMI) has been absolutely stretched( look at the down arrow). The ATR ( 2nd indicator) is also rising in a similar manner. After the point shown by the down arrow corresponding to today's action in markets...the markets kept on going higher for around 200 more points before a meaningful correction set in from 6030 to 6223. If the same thing repeats we might see around 5935 in a couple of sessions before we see a correction heading into October 1st week or may be 2nd.

Defty today has crossed a very important trendline resistance. Used 2 good indicators in the chart below CMO(34) is yet to get overbought . And CCI(34) is way above the 100 line . The markets could go u till the CCI(34) comes from above the +100 line and touches the 100 line itself. Using this logic we see that markets have some distance to go up. 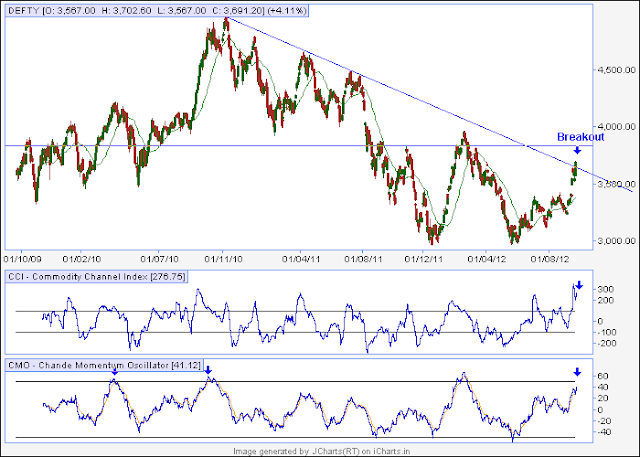 Another chart is this USD -INR chart . The blue trend line support has just been broken today . But just by a bit though. A RED  channel might give support if this continues to go down . And that support might come around the green line at 52.620. 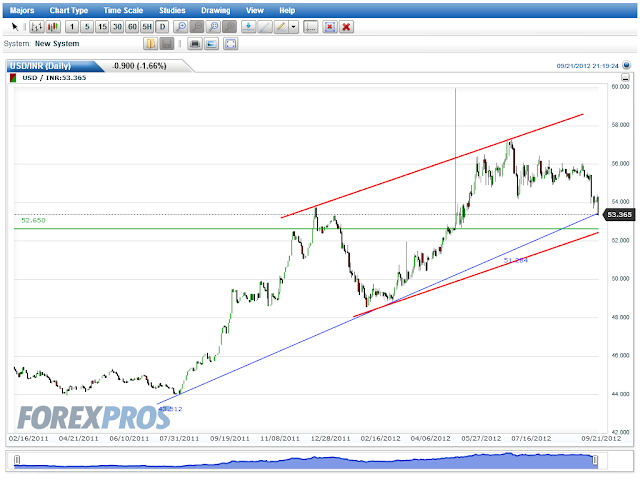 I know the markets are overbought . But the markets can easily touch 5940 in 2 days time in this overbought condition too . But if still in doubt people might stay away and we should be going LONG in  October. 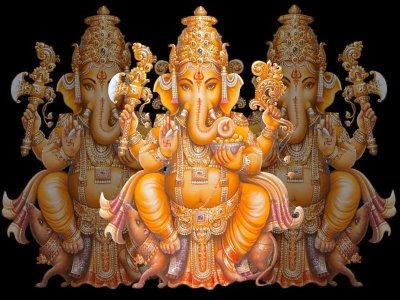 Markets are really now up at crucial resistance points and have a parabolic shape. Most of parabolic markets end badly . The day saw markets striking against resistance levels and SOLD off with HUGE volumes. First look at a very important DEFTY chart. Very very overbought too. 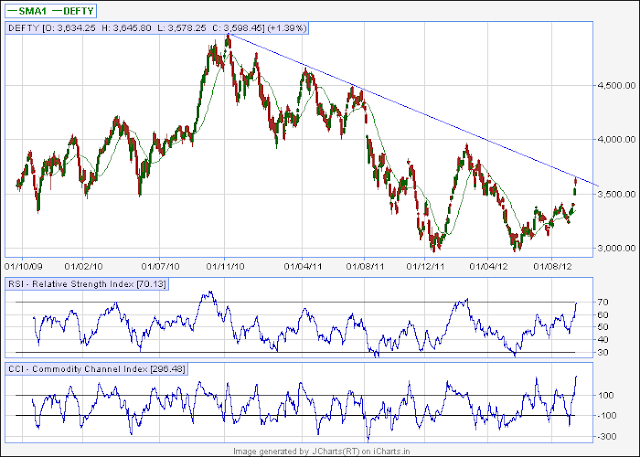 I did one post on Bank Nifty which was following a kind of count ( not elliot wave count).


This is very important analog  I think  and Bank Nifty might go on to hit that trend line again to form point 14 like in 2010. That point 14 is near the point 10 level and that means Bank Nifty might fall a lot from here. 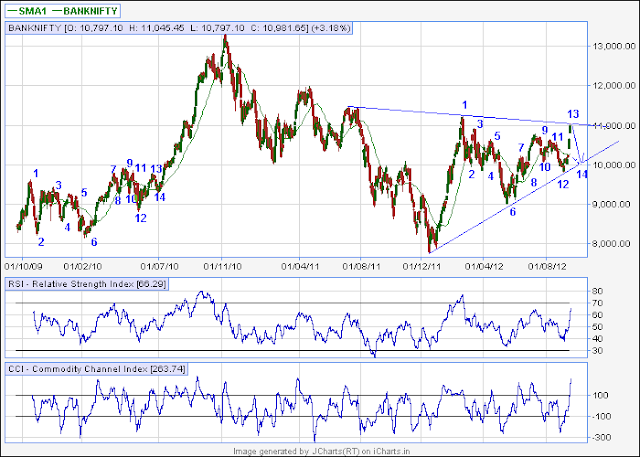 Nifty is going absolute parabolic. We do have a very good WOLFE WAVE  with targets shown by red line.
RSI (210) is at years overbought level. MACD has hidden and regular divergence. And if BANK NIFTY really makes that 13--14 path as shown above , there is a chance we might hit that WOLFE wave target below 5200. 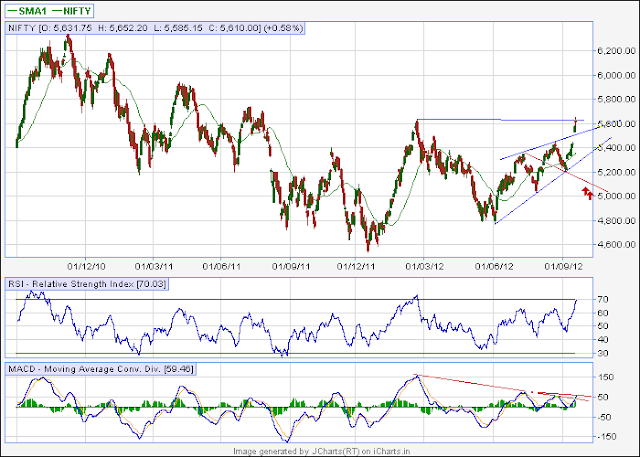 One more addition. Most likely cycle that is being followed by markets around the world is this US presidential cycle.  As I said before this should be the TOP and Ocober 1st we should be doing a 80 week Hurst cycle bottom. Major rally after that. 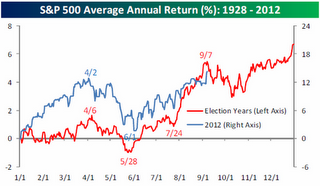 Went long . Its not going down as I thought . I think its better to go long or else I will miss the rest of the upward journey . Most probably Nifty is going to hit that upper Blue line at around 5520. 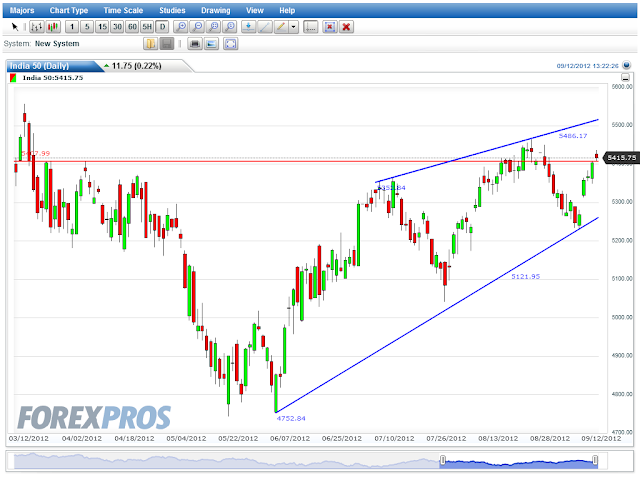 So as I suspected this zone is proving to be a real resistance . But Nifty Futures could only come down to 5350 level  contrary to the 5295 level which I expected. But still I think I will wait for tomorrow's IIP to be announced before taking any position. IIP days have been seen to be negative . So lets wait. 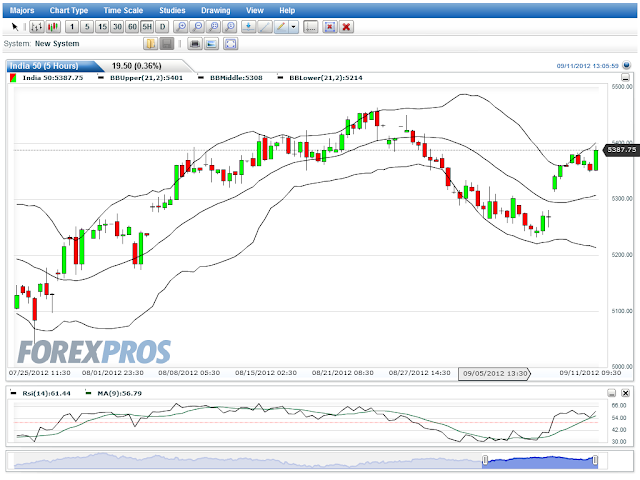 So got the upmove that I was waiting . And how do I play this. I have taken off my longs. Below is a daily chart with 21 day Bollinger band. Mid BB level should provide resistance. 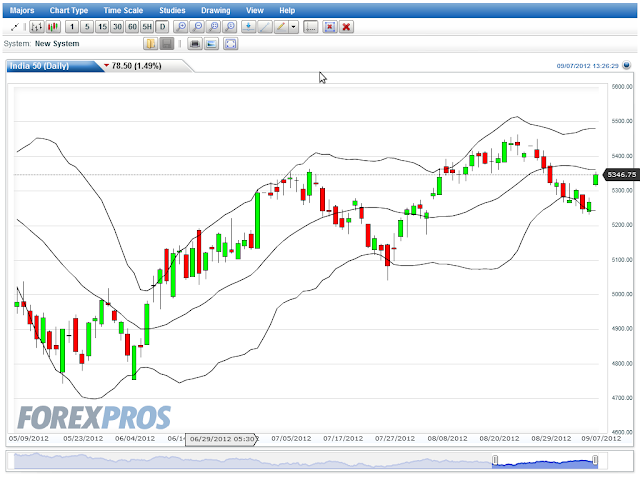 Below is the 5 hour chart with 21 period BB.  Nifty Futures hitting upper level, that is even a better info that we should not go higher from here without going lower.Stiff resistance this upper 5 hour BB level always. Should not cross at the first attempt.  I think we will get NF near the mid bollinger level at 5295 area to BUY again. May be on Monday . 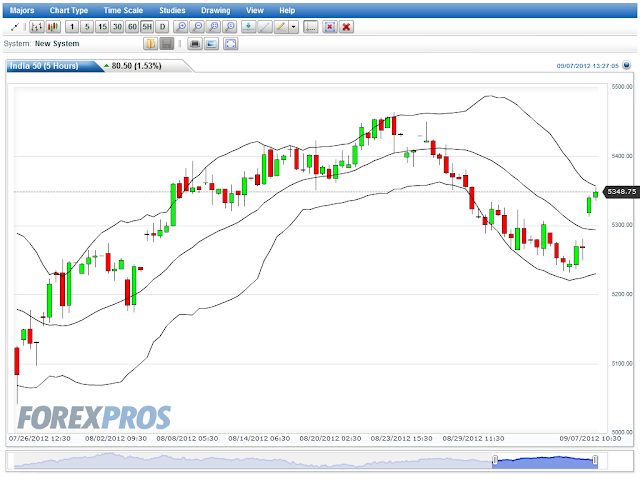 Booked my longs and waiting . Monday looks to be a buy again at some lower level.
Posted by jonak at 1:03 AM No comments:

The up-move that I was expecting has not come but we have not gone down either.  Indicators are oversold or very near oversold zone.The lower trend line support is very near. Also 21 day Bollinger Band. Most probably a touch down at 5215 and the GAP will also be closed. 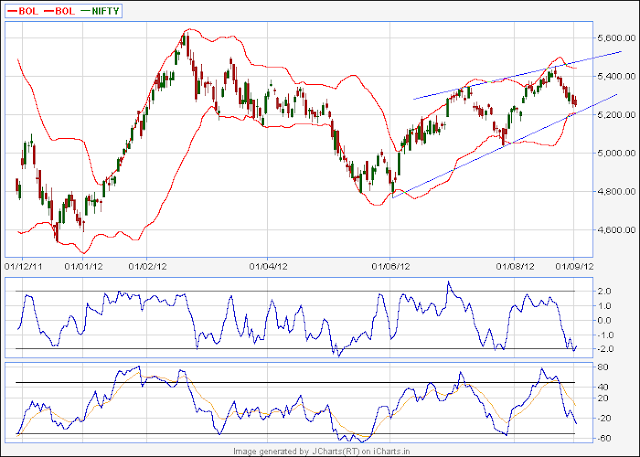 Then a bounce.
Posted by jonak at 7:55 AM No comments: