I think the pullback from 4790 was over at 5000 level and now we should see more selling to come. The 2004 index that i was watching is playing well , though i was looking for a straight nose dive to 4500 level that did not happen. instead we stopped at 4790 and now we should resume selling.  There are also astrological similarities with 2004 as i got to know from the blog below::

http://marketsmusic.blogspot.de/
".......... On 6th June Venus will pass through the disc of Sun like an ant moving through a golden plate. Don't try to see it by naked eyes - it may damage your eye sight. Use necessary protective measures. Such a Venus transit through the Sun disc(as seen from the earth) had taken place in June 2004 and after six months a massive earth quack and Tsunami struck the world. Do meditate and pray to have strength to face the natural calamities that may be due in Nov/Dec 2012. ........" 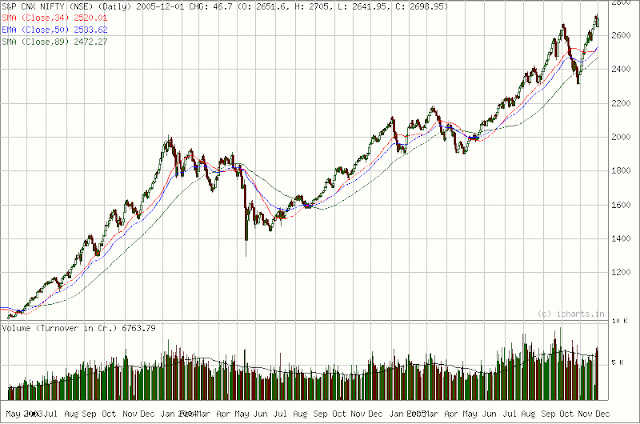 We should be setting for something similar. The nose dive that i was expecting to 4500 is not exactly similar . We had a stop at 4780 from where we bounced till 5000. We have sold off from those levels to reach 4840. And i think more downsides to come. Minimum target for me is 4640 to close the GAP . And i think we should head lower. We had a freak trade for June contract of 4504 on 21st of May . these figures have been achieved on earlier occasions and theres no reason for me to think that this will not be achieved this time.
The descending triangle breakdown itself has a target of 4600 . 34 week BB( bollinger bands) lower level is at 4610 , 144 daily BB lower is at 4580 and so is the 89 week BB Lower level.

Another logic is that we need severe sell off and bearish sentiments for the FED to declare QE3. FOMC is slated for June19-20. Nice timing.

I have drawn an expected flightpath for the Nifty . Lets see. For the moment I am holding shorts . The FII-option data is also looking bearish with huge selling by FIIs . 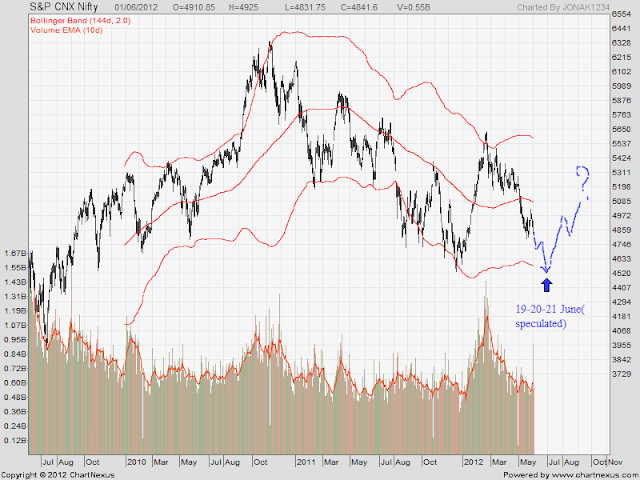